Can You Guess These Beatles Lyrics Quiz | 30 Questions

The Beatles was a musical group that was formed in 1960. They were from Liverpool, England. The band had four members John Lennon, Paul McCartney, George Harrison, and Ringo Starr. Many people say that this was the most famous band in the history of the music industry. They played a massive part in creating the counterculture of the 1960s. The Beatles also were quite influenced by Indian classical music and slowly started incorporating Indian classical music in their songs. 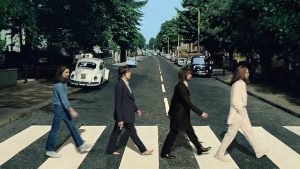 They also went to India multiple times for meditation and spent a lot of quality time there. The duo john Lennon and paul Macartney were the primary songwriters of the band.  Before the band got famous, they used to perform in clubs in Liverpool and Hamburg. They went through many different drummers, but in 1962 they got with Ringo star, and that changed a lot of things for the Beatles. We have made a Beatles lyrics quiz, so if you are a fan, you should play the name that Beatles song quiz and test your knowledge.